In Conversation: Sir Clive Woodward and Charles Mindenhall reflect on lessons from past crises

Back when companies and countries began to enter lockdown in varying stages across the globe, it seemed one of the biggest challenges our businesses faced was making the transition to remote and socially distanced working.

But it’s becoming increasingly clear that work will never be the same again and this is just the beginning. Closing down was easy in comparison to starting up.

The current crisis has forced organisations to adapt rapidly to new realities and ways of working, with many seeing digital transformations in weeks that previously would have taken years. 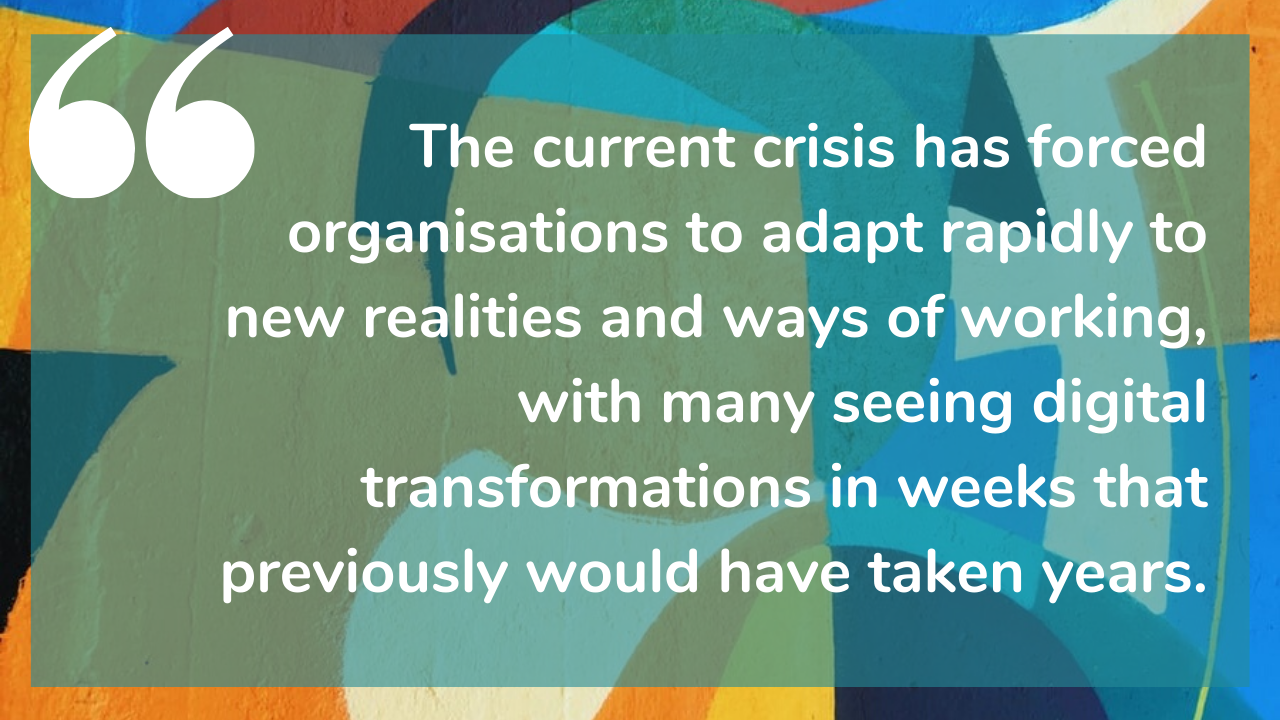 But maintaining these levels of agility through the pandemic and beyond requires a deep-rooted culture change, and the time to act is now.

So we brought together World Cup-winning Coach, Sir Clive Woodward, and Charles Mindenhall, Co-founder of Blenheim Chalcot, the UK’s leading digital venture builder, to reflect on their experiences of leading teams through turbulent times, building businesses that have thrived even in recession eras, and insights curated from their networks of CEO peers.

We’ll publish parts of the discussion as part of a mini-series so you can access their insights in bitesize bursts of actionable learning.

Part 1: You don’t lose; you either win or you learn:

Given that we’re all facing this big challenge at the moment with COVID, and also that the world is in turmoil and facing a crisis, I wondered if you might talk about some of the crises you’ve had, some of the challenges you’ve had in your career because I’m sure it all hasn’t been a bed of roses.

Yeah. Thanks, Charles, for that question. You’re absolutely right. I mean, it’s great here, in how we talk about 2003. I could never be more proud of what happened in 2003 and everyone involved in that, but only four years before that, in 1999, was my first World Cup. I’d been coaching then for just over a year.

We went to Paris and got beat by South Africa, badly beaten in quarterfinals, when everyone’s after your head. To me, that was crisis-plus. I’d never experienced anything like it in my life before. I’d only been in the game, went professional… I was the first coach. You have a poor World Cup. Not that we should’ve expected any more, because we weren’t good enough to win the World Cup or get anywhere close to it. But when you get thumped by South Africa, that is a crisis.

Looking back now at how I handled it, I was … I won’t say how I handled it. I got through it. I think sometimes you’ve got to say to people, “You just gotta get through this, and then draw on the learnings.” But what I did do is learn. One of my favourite all-time sayings is that I never lose. I either win or I learn. I really learned that, because life doesn’t go like that. You never go in a straight line. It’s never happened. I’ve never seen a business, anyone’s career, go like this. There’s always big bumps on the way. It’s how you come through those big bumps and crises.

There’s a couple of things I reflected back on, and especially from ’99, which was the biggest crisis I’ve faced because I thought I was going to get sacked. You feel every media is after you. You have your picture on the front page and the back page. You’re going to get fired and sacked. Your kids are affected. It’s pretty tough, you know? So I think there’s a couple of things I learned. One, it is okay to grieve for a certain amount of time. You’ve got to just literally shut the doors and get it out of your system, but no more than just a few days. 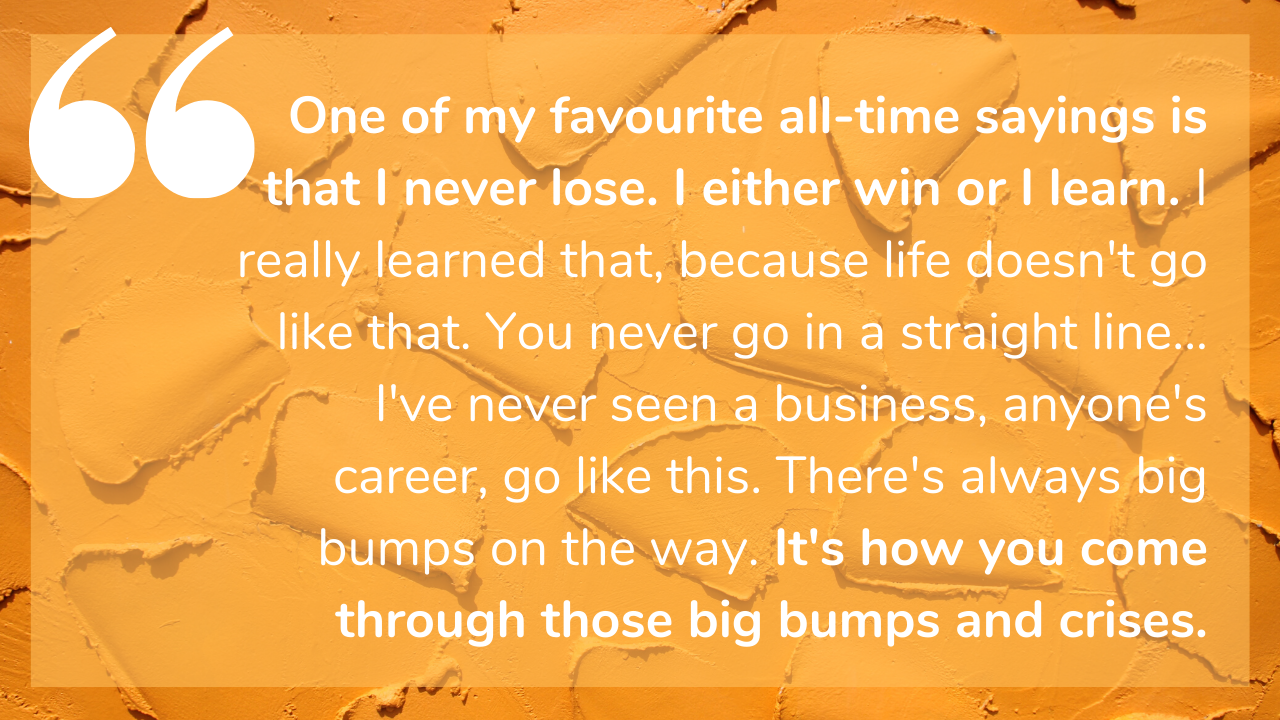 I looked at him and I said, “What do you mean?” He said, “I didn’t tell you this before you came. What I’ve had is all my troops listening in to conversations, eavesdropping behind the scenes, and all this sort of stuff, and these eight …” Obviously, I’ll never, ever name these eight players. But if he had asked me to name eight players who I didn’t trust or I was a bit worried about, these would be the eight players. So within 24 hours, they had sussed out what I went on to call energy sappers.

I never forgot that. Of course, you go to the World Cup. I didn’t make any changes. Those players all came. During the World Cup, you could see stuff unravelling behind the scenes. Some of these players that I’d been warned about just weren’t there with you. What you learn from a crisis, you really know who your people you learn to trust and respect. Who your mates are, really. Who’s going to be with you when you’re in a corner. 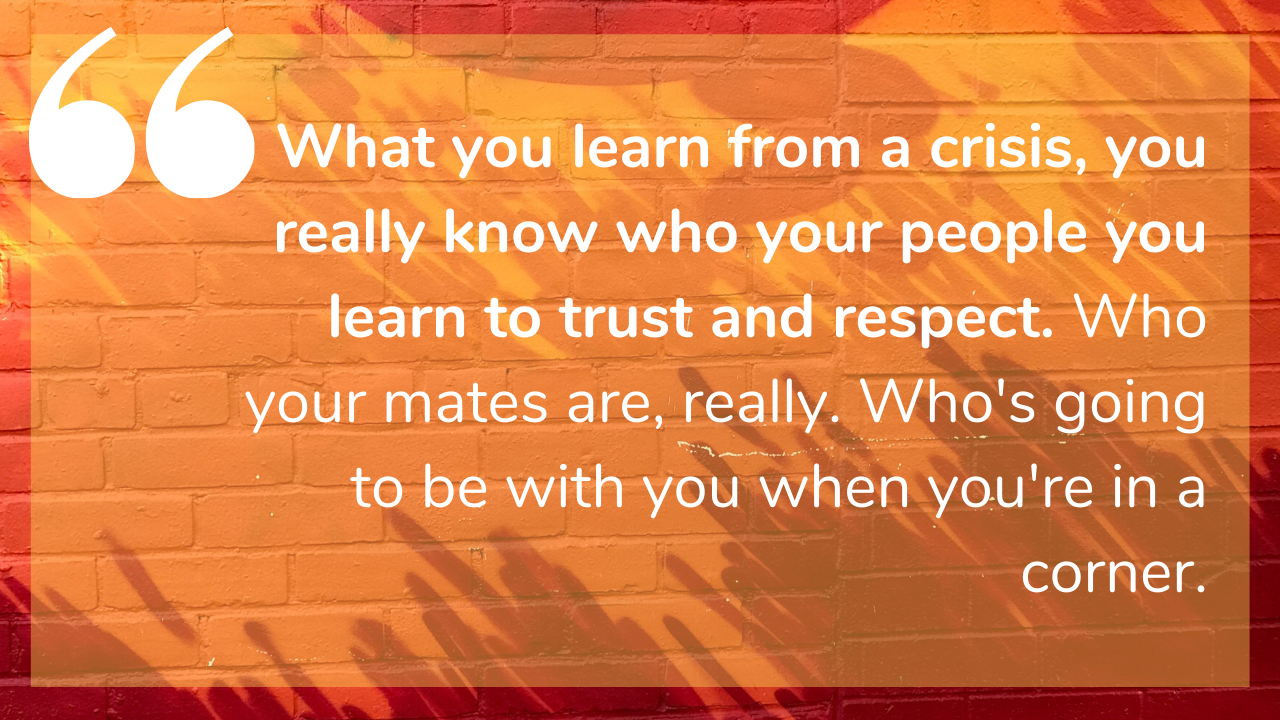 So, when you see what’s going on at the moment, now is the time where you should really be looking at your team and really find, okay, which people can I really trust? Who’s going to watch my back when it’s not going well? Because it’s one thing, people being with you when you win in 2003… I’ll never forget the players who really stood by me and the team in ’99 when it was all going wrong. But in this crisis, that’s the first thing that I really learned.

Also, when you do have doubts about people, you do have to change them. There’s no secret to this. I think there are some figures about how sometimes it’s healthy to change 10% of your team every year. There needs to be turnover because you need to keep revitalizing it. I learned a huge lesson that day. All I can say is, four years later, into 2003, there wasn’t one single player on that team who I didn’t completely and utterly trust on the field, but more importantly off the field, to act professionally. So the learnings from the Marines were absolutely huge.

Winning doesn’t happen in a straight line. Nobody is a consistently perfect employee, and everybody will at some point receive critical feedback or experience failure at work. Many business and sportspeople, including some of the most successful, experience difficulties. The important thing is to be able to cope with these issues, learn from them and ultimately become stronger and more effective as a result.

If you’d like to listen to the full recording, you can do so here.

In Conversation: Sir Clive Woodward and Charles Mindenhall reflect on lessons from past crises

The important thing is to be able to cope with these issues, learn from them and ultimately become stronger and more effective as a result.

Listen to the full recording 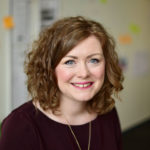 Hive Learning speak to 1,000s of organisations every week about what it takes to create a culture of everyday learning and collaboration - specialising in the areas of inclusion, leadership development, innovation and wellbeing. Passionate about tapping into the power of her peers to help one another go faster, Hannah leads the research, curation and development of insights from 1,000s of cutting edge learning and development leaders, distilling learnings into practical and actionable insight that leaders can put into practice right away. Learn more at www.hivelearning.com.

Build back better: accelerating out of Covid-19 and into the new world of work

In Conversation: Sir Clive Woodward and Charles Mindenhall on why agility is critical to accelerate out of the crisis

In Conversation: Sir Clive Woodward and Charles Mindenhall on the mindsets leaders need in crises