Why it’s best to be an ally in training

This is part one of a two-part series about how to be a better ally. Understand the mindset of an ‘ally in training’ and get to grips with the very best tips to put allyship into action.

🎁 Bonus resource for podcast listeners: if you heard Julie Kratz’s suggested allyship action on our podcast, visit our Workout Affinity bias and you: Evaluate your inner circle to bring her recommendation to life as a team

🎯 Being an ally is supporting members of underrepresented groups (that you are not in) in the fight for equal advantage.

Often, allyship is spoken about in relation to broad demographic groups like women, people of colour or the LGBTQ+ community.

While focus on specific issues is really important, you can be an ally to anyone with an underrepresented characteristic, such as a personality type that is the “odd-one-out” in your team.

The second poll above covers some common stages of allyship. We’re all at different points in our allyship journey. It’s also sort of fluid since the obvious opportunities to be an active ally come and go.

To really make ground with D&I issues in our company and society, we should aim to confidently say that we carry out actions to shine a light on issues whenever we can, even stepping out of the way and passing our opportunities to others (which isn’t as scary or martyring as it sounds!)

🏃 What do allies actually do?

Awareness and reflection are really powerful. But ultimately the best allies take action. Being an active ally comes hand-in-hand with accepting that you are always learning, you are are an ally “in training”.

👇 Confused? Read the comic below. 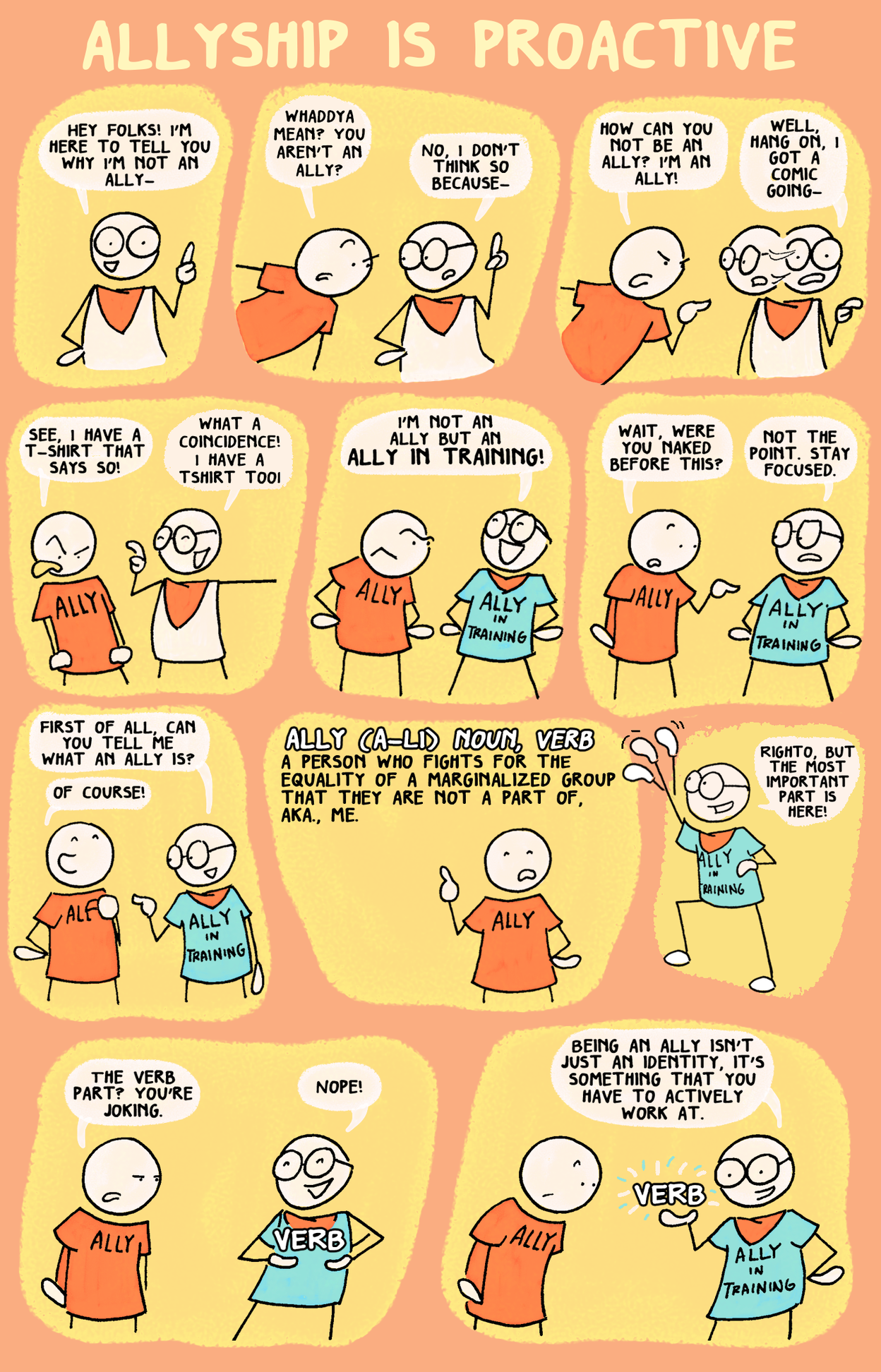 Adapted from Is Your Allyship Proactive? by Meggie Ramm on Everyday Feminism.

🏋️ Why we’re all in training

There is no manual or script for a being a good ally. In fact, weathering uncertainty and deciding what to do in a sensitive situation is what makes you a brilliant ally.

That means we’re all getting better all the time. And if you’re committing to learning as you practise then at least you are, well, practising!

The enemy of effective allyship is thinking you’re an expert and/or a good person™️ and, as a result, being complacent. This sort of inaction can be even tougher to break through than someone not caring or knowing about the related issues at all!

Being an ally is advocating alongside or on the behalf of groups and individuals that are underrepresented. The two keys to allyship are to be active and to be always learning which, fortunately, come hand in hand.

This is part one of a three-part series about how to be a better ally. Understand the mindset of an ‘ally in training’ and get to grips with the very best tips to put allyship into action.

Listen: The formula for being a great ally

Listen: What is allyship, plus some cautions & caveats for allies