What stops you from talking about diversity?

Talking about diversity still makes many of us uncomfortable.

Many of us were taught that it’s rude to point out people’s differences, maybe because it highlights the “odd one out”.

Educator Dr Beverley Daniel-Tatum asks her students to think back to the first time they became aware of race. Often, it’s a moment when at a young age, we innocently commented on someone’s characteristic and were silenced by the adults around us.

Those are important teaching moments where we learn what is socially acceptable to talk about — and what isn’t.

As adults, we tend to avoid talking about diversity out of fear of saying or doing the wrong thing.

🚨 But shouldn’t we treat people as individuals?

Ultimately we should treat people as individuals. But some say the above to bypass talking about diversity and actually argue that talking about our differences is what creates the problem.

People sometimes use Martin Luther King Jr.’s speech where he wishes for a world where his children will be “judged by the content of their character and not the color of their skin” as permission to be colorblind.

This color blindness extends to all types of diversity.

👁️‍🗨️ “I don’t think of you as having a disability.”

❌ But ignoring what makes us different isn’t the answer to tackling inequality or being truly inclusive.

Inclusion is about acknowledging and respecting everyone’s differences. If we ignore diversity, we also ignore the important parts of our identity we want to celebrate and we pretend not to see patterns in inequality, too. 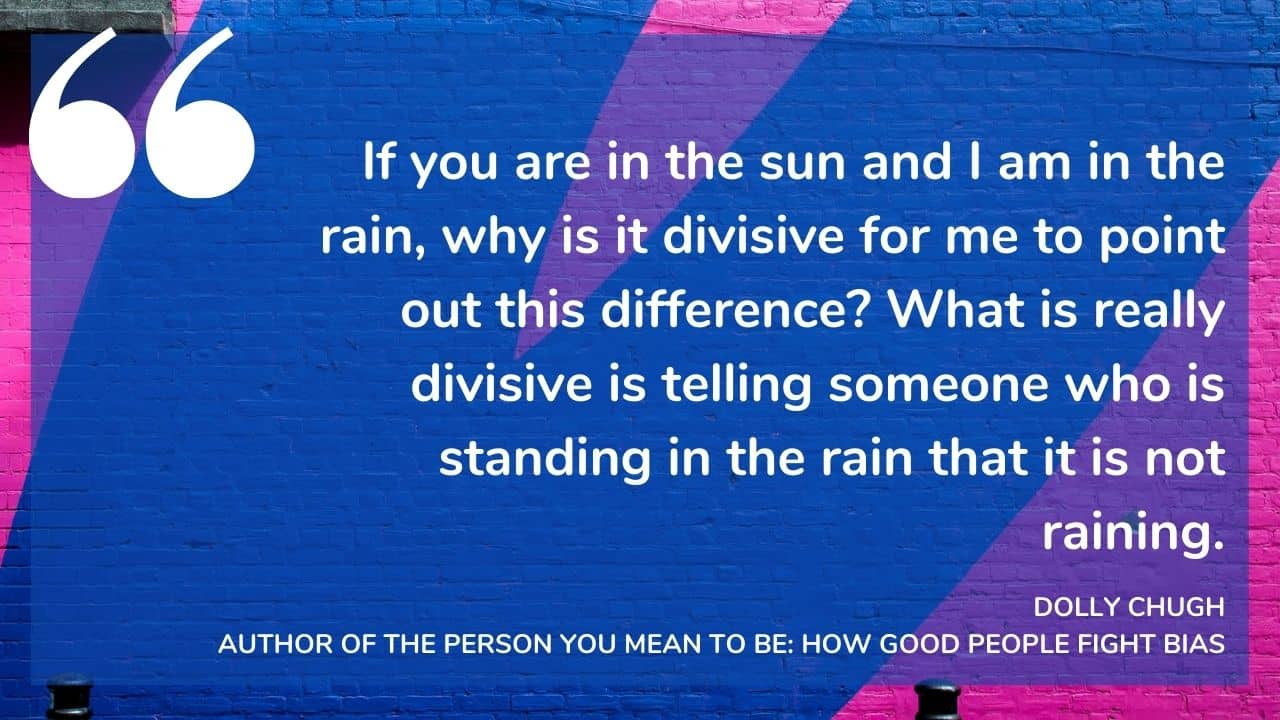 ✋ Accept that you will make mistakes

As psychologist Dolly Chugh says, our fixation on being a “good” person who never does anything wrong actually gets in the way of becoming a better person.

The kind who doesn’t shy away from uncomfortable topics.

If you make a mistake, accept it, apologize and ask for guidance on how to avoid it in the future.

It’s approaching difference with an open mind, recognizing that you always have more to learn and letting go of what you think is “right” or “wrong”.

✅ “I don’t know much about that traditional dress. Is there a particular history behind it?”

This means embracing all parts of that person’s identity and what’s important to them. That might be the fact that they love to cook.

It might also be how important their race, religion, disability, gender identity or sexual orientation is to them.

Remind yourself not to assume based on group stereotypes and respect what each person wants to be called.

What’s stopped you in the past from talking about diversity? Encourage your team to share their thoughts by explaining your answer to this question.

Inclusion Works from Hive Learning is a group-based peer learning program designed to create inclusive and impactful change across your organization. We give people the tools to make small changes to their daily behaviors and help them rapidly learn, relearn, and respond to the changing world around them.

Elevate all voices from the start in meetings

How to be antiracist and self-educate