2020 threw plenty of curveballs at organizations and DEI teams. COVID-19 created new and urgent people needs while putting many companies on rocky economic grounds. And the resurgence of the Black Lives Matter movement meant people wanted to have difficult conversations, but didn’t know where to begin. We wanted to know how the most impactful DEI leaders tackled each challenge, so we sat down with DEI experts at the helm of some of the world’s largest and most influential organizations. Then we distilled their insights. This is a snippet of the full pulse report, State of DEI 2020-2021, available online and as a PDF.

PS – If you don’t have time to read it now, you can also sign up for our newsletter and we’ll deliver the report straight to your inbox in bite-sized chunks over the course of the next week.

Before this year, leaders told us anecdotally they could expect about 30% of their teams to engage in DEI initiatives. They turned up to webinars, engaged with ERGs and read all the resources on offer.

But this year, something changed. Groups who previously didn’t engage in DEI — in particular we were told, white men — asked what they could do to help and how they could contribute to building more equitable workplaces. They were ready to have uncomfortable conversations and recognized the role they may have played in reinforcing systemic biases.

People showed up to Town Halls, checked in on colleagues, and asked about their organizations’ DEI strategies. They finally realized that DEI is not just ‘HR’s job’.

Terms like antiracism, white privilege and systemic racism were added to the corporate vocabulary.  And while Donald Trump’s executive order threw a spanner in the works, DEI teams are working hard to ensure this doesn’t hinder essential conversations. 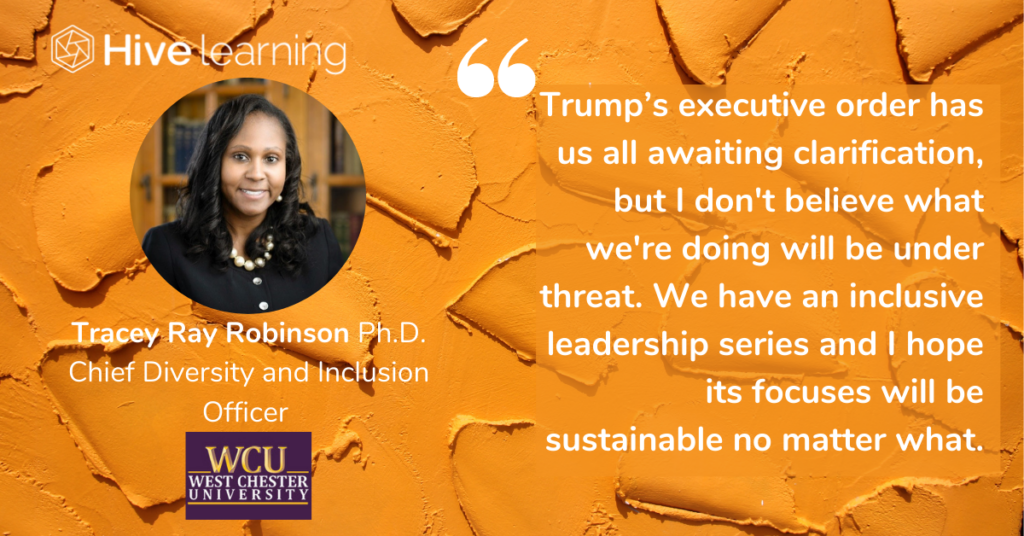 As a side note, we hope that the executive order will be revoked under President-elect Biden. As it’s in effect until January 2021, our guide can help you understand what it might mean for your DEI strategy.

DEI leaders prioritized making sure people felt heard with listening sessions and open forums. They gave people a platform to ask questions, created safe spaces to get it wrong, and began to create a culture of continuous learning around DEI issues.

DEI leaders shared resources digitally to reach workforces dispersed by the pandemic, and were careful not to burden Black colleagues with the expectation of helping everyone. Employee resource groups played a crucial role in mediating discussions and reviewing resources.

Some organizations even published their resources to help others who didn’t have the resources to create content internally, citing the belief that DEI should never be a competitive advantage.

Expedia shared their Actions to be Anti-racist, Xaxis shared their Journey to Anti-Racism and we also published our own collection of antiracism content.

And because senior leaders and managers were now expected to speak on social justice and DEI issues, it became necessary to upskill them quickly so they could speak with confidence on these subjects.

Organizations that saw productive change were the ones in which senior leaders were honest and vulnerable. These leaders openly admitted where they felt incompetent and showed a willingness to learn and grow.

After all, leaders are spokespeople for their entire organization, and questions from a senior figure like “What is Black Lives Matter? I thought all lives mattered?” could cause immense damage internally and externally.

In one organization, “safe spaces” allowed staff to be vulnerable and ask questions. These judgment-free “safe spaces” cleared up common areas of confusion and participants came away feeling bonded and more comfortable having these conversations. 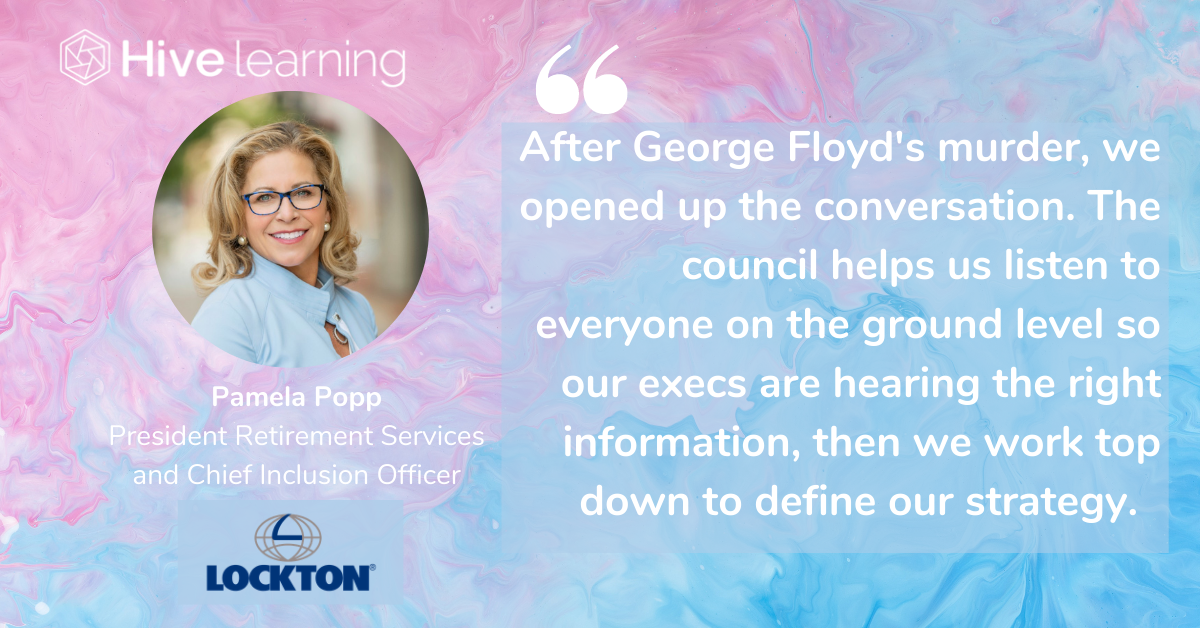 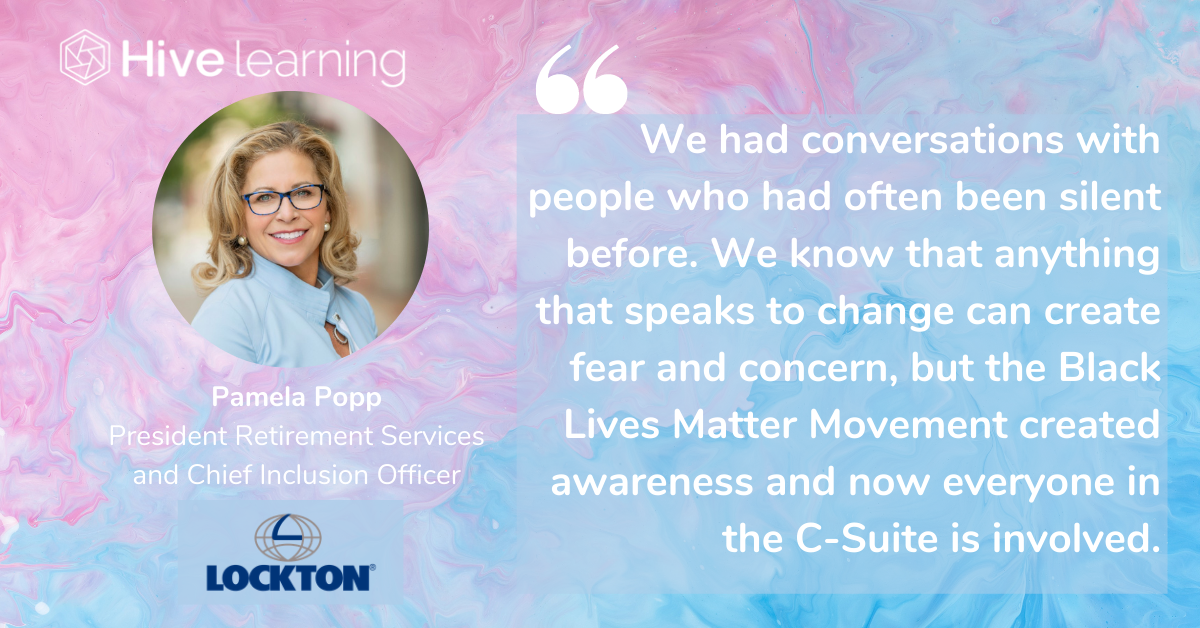 In encouraging leaders to have courageous conversations, people were equipped with resources giving them the language to proactively take part in discussions about race — rather than sitting and listening on the sidelines.

Leaders and managers were equipped with discussion guides like the ‘Workouts’ Hive Learning clients used as a framework for having interactive discussions about race and racism. Giving people the tools and permission to have these discussions is a vital part of the process, especially for subjects that have historically (and wrongly) considered inappropriate for the workplace.

Conversations like these were critical for helping people develop empathy and ‘find their way’ when it comes to equity and inclusion. But moving beyond conversations and into action will be critical for effecting lasting change.

One thing we heard time and time again is the importance of turning the momentum of the Black Lives Matter movement into long-lasting, sustainable change. The central part of this is moving beyond awareness to action. 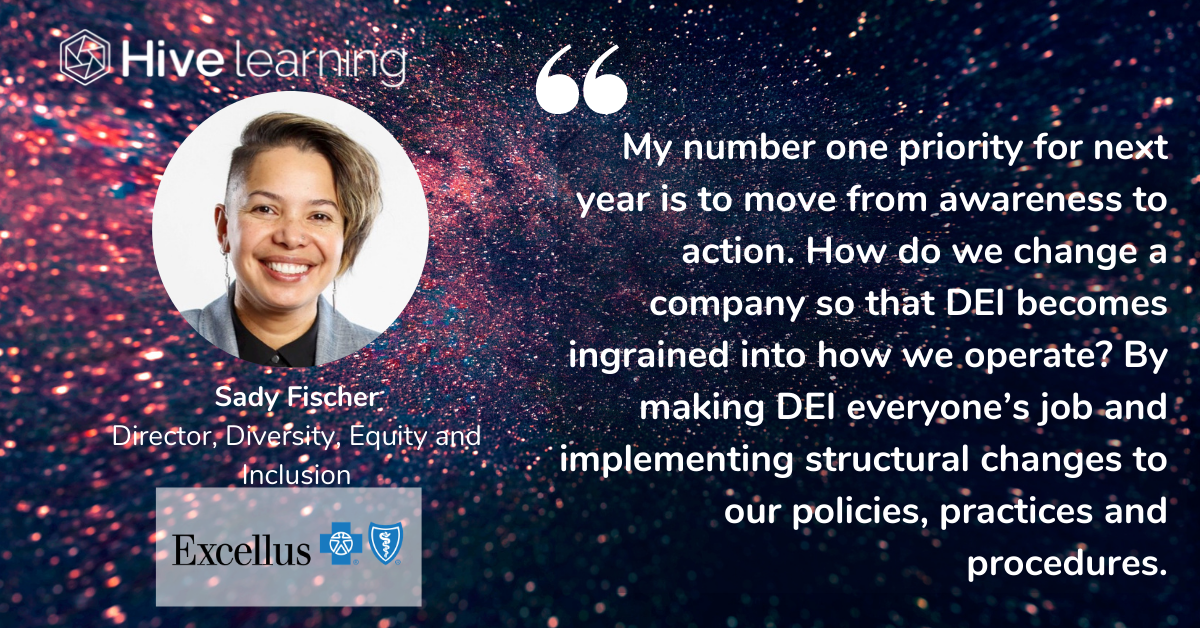 The challenge with bias training, leaders shared, is that too often it tells people ‘you have bias’ and not ‘here’s what you can do about it’. The result? People feel guilty, powerless, and fail to take action.

What’s worse is that this kind of training can fuel resentment, as we saw from Donald Trump, and DEI initiatives can be thought of as little more than blame-and-shame exercises.

This year, we noticed a marked rise in DEI training focused on helping people understand how to strip bias out of their processes and embed inclusion in their daily behaviors.

All companies need to do a deep-dive and identify the exclusive practices that surface across large internal processes. At Expedia Group, we are asking ourselves: At what points do we see systemic oppression in the employee and talent lifecycle? Are there unidentified barriers to creating inclusion during our hiring or exit processes? This will help to identify areas where inclusive interventions should be implemented.

The most impactful organizations focused on showing everyone what inclusive behavior looks like and what the expectations are from them. How do they go about their day in an inclusive way? If a customer or client makes a racist remark, what do they do? Make sure your people are equipped to operate inclusively and know how to react to racism when they see it.

Hive Learning clients used checklists to help hiring managers debias hiring, gave people practical tips on how to be an ally, shared guides on talking about subjects like race and ethnicity, and equipped people with antiracist actions.

This is the key to driving greater accountability around equity.

In some cases, old structures have been scrapped in favor of systems that democratize DEI and focus on including the people who can really influence people and systems. 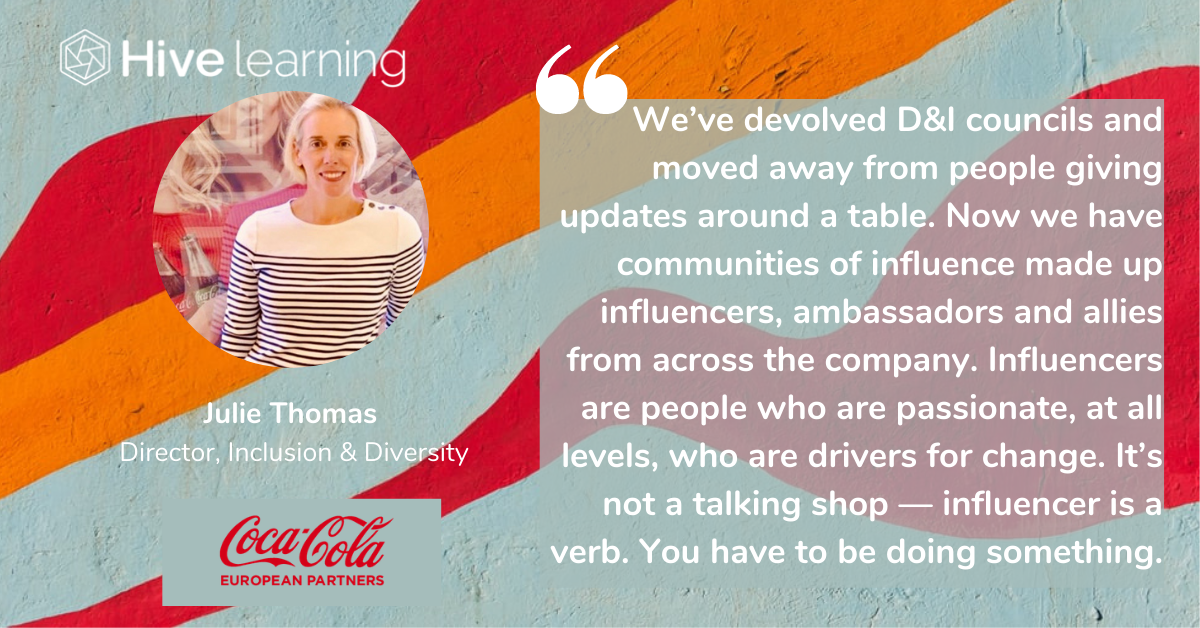 It’s clear that to create long-lasting change we must be proactive in reminding people and making it easy for people to play their part. Inclusion must become a habit. And in some cases, DEI leaders are looking to digital tools as the answer. 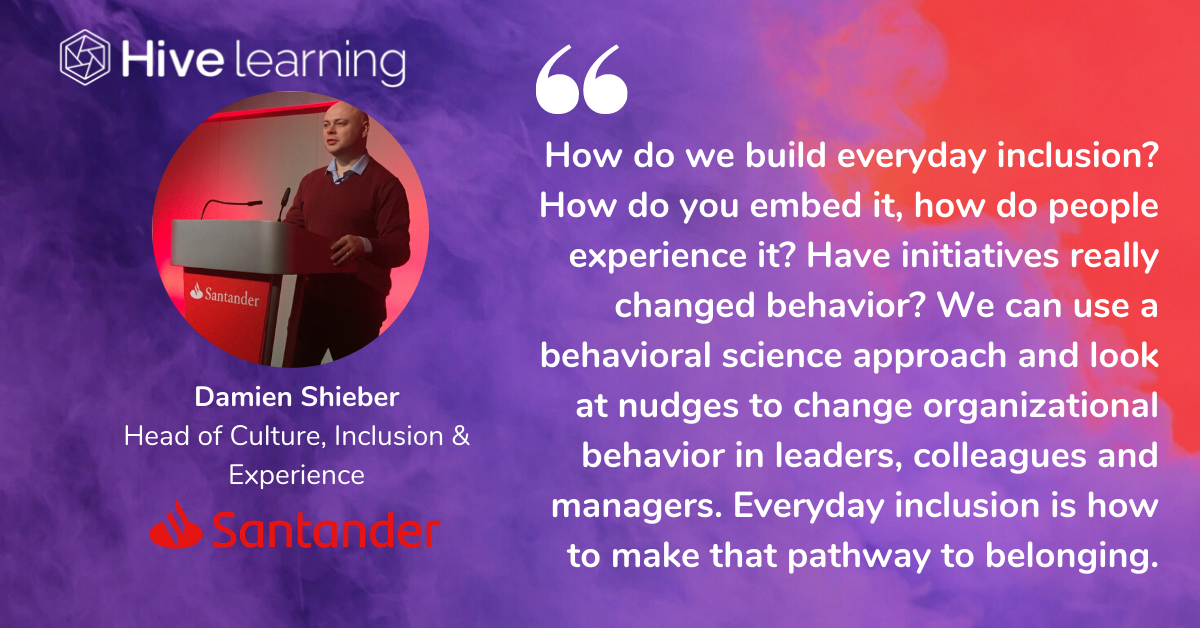 We worked with insurer Sun Life to drive an inclusive workplace culture using our digital inclusion program, Inclusion Works. By using peer learning to take participants on a journey from unconscious bias to conscious action, Sun Life is helping employees embed tiny but powerful acts of inclusion into their daily behaviors and routine. Ultimately, this helps their people own, accelerate and embed change — making inclusion become a habit more quickly.

The program delivered bite-sized, actionable content on topics like how to respond to micromessages, ways to be a better ally and how to build psychological safety. Leaders could consume, process and plan how they would take those actions in their day to day.

It created a huge wave of momentum and a pilot of 1,500 employees in North America and Asia resulted in 94% of learners feeling confident demonstrating inclusive behaviors at work and 88% committing to taking action on what they learned.

Following the pilot’s success, Sun Life decided to launch the Inclusion Works program to their whole workforce. Find out more in the press release here.

From here on out, the most impactful DEI leaders are prioritizing getting everyone involved in playing their part on the journey to building equitable organizations.

This will be critical to ensure new DEI strategies aren’t set up to fail — DEI leaders can no longer be expected to single-handedly carry what should be a business-wide responsibility.

If you want to download the full report and share it with your colleagues, get the PDF here:

Is digital DEI here to stay?