There’s a significant disparity in health outcomes between Black and white Americans.

Some stats: Black women are 3X more likely to die of pregnancy-related issues than white women. The Black infant mortality is 2X the rate for white infants. Black people have the highest mortality rate for all cancers combined compared with any other racial and ethnic group in America. 10.6% of Black Americans were uninsured compared with 5.9% of whites in 2017.

While some of this disparity can be accounted for by socioeconomic factors, not all can. Let’s dig into some examples that reveal social factors at play here. 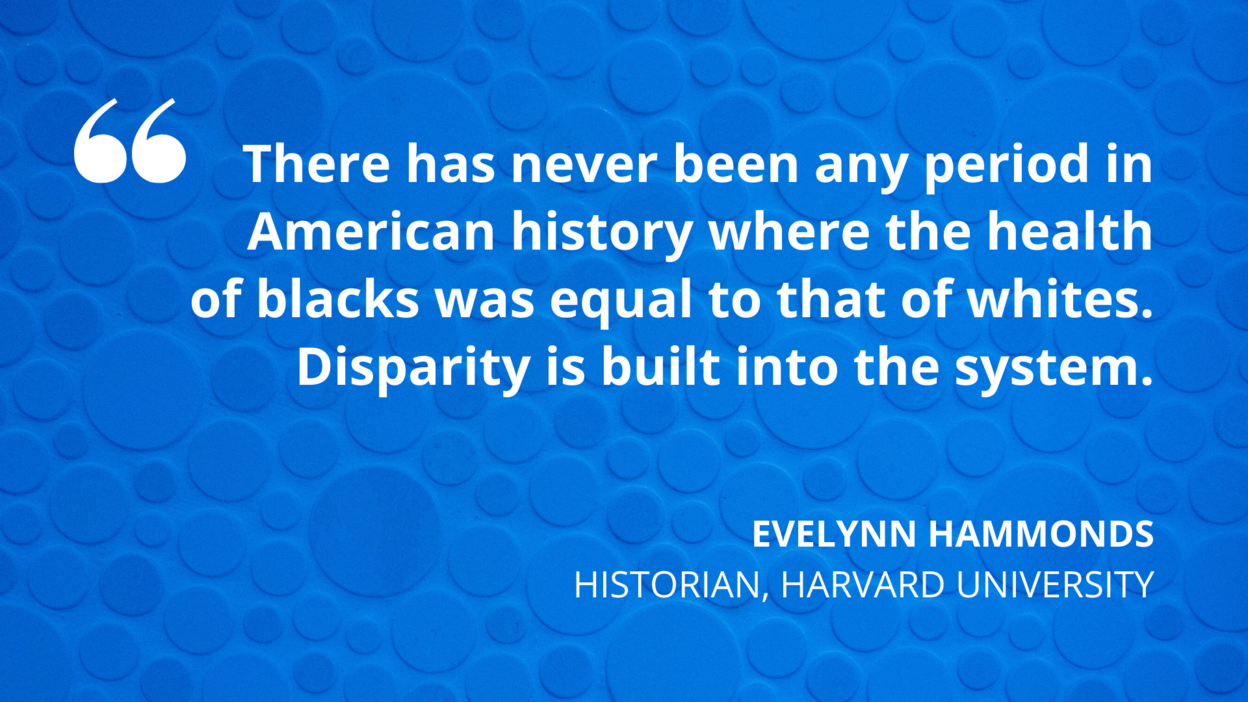 An example from history: pain, consent and racism in 19th-century gynecological experimentation

J. Marion Sims has been called “the father of modern gynecology” and lauded for contributions to the field like inventing the speculum and developing vaginal surgery techniques, including an effective treatment for vesicovaginal fistula (a debilitating condition caused by childbirth complications that resulted in constant incontinence and pain).

There was no real practice of gynecology in Sims’ era, the mid-19th century. In fact, doctors found it distaseful to examine female organs, and many had no clinical training of childbirth before going into practice. This was reflective of Victorian values, where female nudity (even to a doctor) was taboo.

Sims performed a number of experimental surgeries between 1845-1849 to treat fistulae, using about 10 enslaved women as his patients. We have record of three of these women, known solely by their first names: Lucy, Anarcha and Betsey.

Even though anesthesia was developed in 1846 and widely used thereafter, Sims’ test subjects were treated without the use of anesthesia. Sims’ decision not to use anesthesia was down to a misguided belief that Black people didn’t feel pain, or at least didn’t feel as much pain as whites. (It’s worth noting Sims went on to open the first Women’s Hospital in New York in the 1850s, and there operated on white women using anesthesia.)

The historian Deirdre Cooper Owens from Queens College, CUNY has coined the term “medical superbodies” to describe how Black women were seen by the medical establishment in the 19th century. On one hand, they were seen as intellectually inferior to the white race, on the other physically stronger and capable of withstanding pain.

There is no record of Sims’ human test subjects consented to these experiments (at the time informed consent didn’t exist for enslaved people, only for their enslavers) — and unsurprisingly history has no record of their voices or experiences.

By the time Sims successfully repaired a fistula in an enslaved woman named Anarcha in 1849, he had performed 30 excruciating surgeries on her alone — all without the use of anesthesia.

Even during his lifetime, Sims’ ethics were questioned by his peers.

Today a major inequity in healthcare is the lack of racial and ethnic diversity in medical research subjects. Clinical research groups are typically 80-90% white, even though 40% of Americans identify as a minority.

As the editors of Scientific American say, this is dangerous as it creates blind spots for issues minority groups may experience:

“The symptoms of conditions such as heart disease, cancer and diabetes, as well as the contributing factors, vary across lines of ethnicity, as they do between the sexes. If diverse groups aren’t part of these studies, we can’t be sure whether the treatment will work in all populations or what side effects might emerge in one group or another.”

An example from today: Black people are disproportionately dying from COVID-19

When U.S. COVID-19 infection and death rates including race were first reported in April 2020, it was clear there was a significant racial disparity. Black Americans were and are dying of this virus at more than 1.5X the rate of white Americans.

The media response was swift and decisive: this high death rate was down to the Black community’s higher rate of underlying conditions like heart disease, hypertension, diabetes and asthma (with the subtext that these are ultimately the result of bad behaviors on an individual level). Some went further, claiming it was down to Black people not taking the virus as seriously as white people (note that this was later refuted by survey data).

The reality is much more nuanced.

Chronic health conditions certainly increase the risk of COVID-19 infection and death — but the more important question is why Black folks have higher rates of these conditions to begin with. Contrary to assumptions that it’s down to individuals’ behaviors or inherent racial genetic differences, it’s well-established that “social determinants” are behind the racial disparities in health, specifically:

💊 Access to quality healthcare, health insurance and even emergency medical care (ever heard of “trauma deserts”?)

💊 Access to quality food (“food deserts” are much more common in predominantly Black neighborhoods, even after controlling for income)

..and there’s evidence that racism has a direct influence, too — through unequal care due to racial discrimination by healthcare workers, through bias in algorithms that are increasingly making healthcare decisions on behalf of providers, through stress directly caused by racism, and even through internalized racism that Black Americans experience.

Some academics have argued that racism is a significant enough factor that it should be considered a social determinant of health. Milwaukee’s Commissioner of Health, Dr. Jeanette Kowalik, has even declared racism a public health issue in Milwaukee.

You can probably see links between all of the above factors and other forms of systemic racism. For instance, residential segregation has created disparities in access to quality food, access to emergency medical treatment, and air and water quality. We call systemic racism a web of barriers and oppression because all of these systems are interrelated and reinforcing.

Watch this 8-minute video (optional) that covers a brief history of racism in gynecological care for Black women, starting with Dr. Sims’ cruel treatment of slaves and extending to today.

Note that the statue of Dr. Sims in Central Park featured at the beginning of this video was removed on April 17, 2018.

There’s a significant health disparity between Black and white Americans that can’t be explained away by socioeconomic factors. Social factors are at play, like access to healthcare, proximity to emergency medical care, access to quality food, air and water quality, chronic stress and racism. These factors were created and are perpetuated by systemic racism.