Racism in cultural representation and the media

Nowadays, many see the arts and media as a utopia for diversity.

We know ‘making it’ in industries like film, theatre and television relies on a stroke of luck and a dose of nepotism.

But, actually, there’s more to it than that. Invisible structures and self-perpetuating attitudes exist in the media industry (and its audiences) that warp representation of Black people in media — with seriously damaging effects.

An example from history: blackface for comedy

In the 18th and 19th centuries, white actors often smeared themselves with burnt cork and played buffoon-like characters on stage. These productions were called minstrel shows. They gave white crowds great amusement to see Blackness portrayed as harmlessly inferior.

Minstrel shows commodified Black people, excluded them from choosing their own representation, perpetuated stereotypes and ideas of white supremacy and, no doubt, were deeply offensive, disturbing and annoying.

How did this set a lasting system in motion?

These caricatures took a firm hold of the American imagination, laying down expectations for Black people on and off stage. Everything from Black features to folk songs was appropriated and projected by this engine of entertainment and comedy.

💡 ‘Jim Crow’, for example, is a minstrel show character created when a white performer mimicked a shuffle dance jig to a folk song that originated in the Yoruba culture of West Africa. 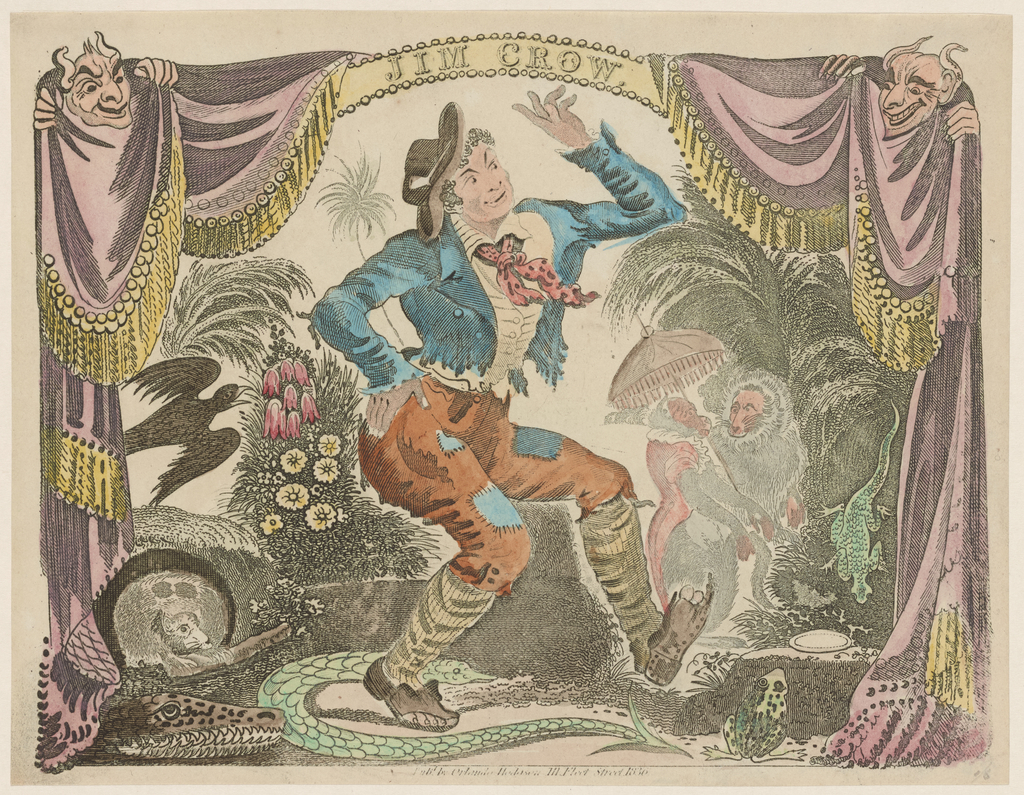 Although Black people have always resisted victimization, many watched these shows and some even became performers to make a living.

Black performers in this position might don blackface literally or figuratively and play stage personas such as the gentle Uncle Tom, the salacious Buck, or servile maids and mammies.

This filtered a white supremacist narrative through their performance, their livelihoods, and the audience’s viewership.

Their identity was smeared by cruel racist stereotypes that they were lazy, simple, greedy, or overly sexualized. And, while minstrel shows died out by the First World War, this synergy between expectations and production of shows continued for decades.

An example from today: representation in Hollywood in the 2010s

In the 2000s and early 2010s, white casts dominated the theatrical film industry. Adding just one actor that was Black, indigenous or a person of color (BIPOC) to the lead cast resulted in earning 40% less box office revenue internationally. (Anomalies included Avatar, Life of Pi and Skyfall)

But game-changing movies like Black Panther, Get Out and Moonlight among others established that there is a clear market for films that cast and tell meaningful stories about Black people.

So, how close are we to fair representation in Hollywood? 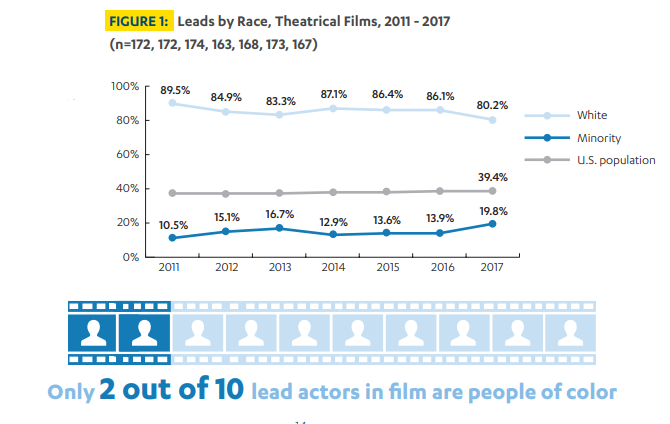 The 2019 UCLA Hollywood Diversity Report suggests there has been a small but positive change towards representation in casting in recent years. Take a look — what do you think about the numbers?

However, the same cannot be said for talent behind the camera. White writers, directors and crew members are still overrepresented in the industry.

Breaking cast representation down, it seems that intersectional diversity is further behind still: representation of women of color and LGBTQ+ people of color can be described as, “an epidemic of invisibility” due to being so insufficient.

Can targets and standards help?

The British Film Institute introduced Diversity Standards in 2016. In 2020, they published their analysis of all the feature films that had tried to adhere to these standards.

🎯 This suggests stories are still being shaped by and for white audiences — with underserved audiences being catered for in only very superficial ways.

Even when Black people are represented, they are often misrepresented

Unfortunately, casting a Black actor in a role or selecting a project with diverse characters doesn’t automatically pop the bubble of pervasive whiteness. Black representation in media is subject to tropes, stereotyping and whitewashing.

DW analysis of 6,000+ movies found that, while some racist Hollywood tropes have fallen out of favor, some are going strong and rubbing shoulders with new tropes.

Essentially, writers, producers, directors, acting coaches, casting directors, costume departments and all the other facets of media production continue to work on a narrative that centers white people.

Blackface may have been eradicated but Black characters are still often used to fulfill stereotypes and tropes, 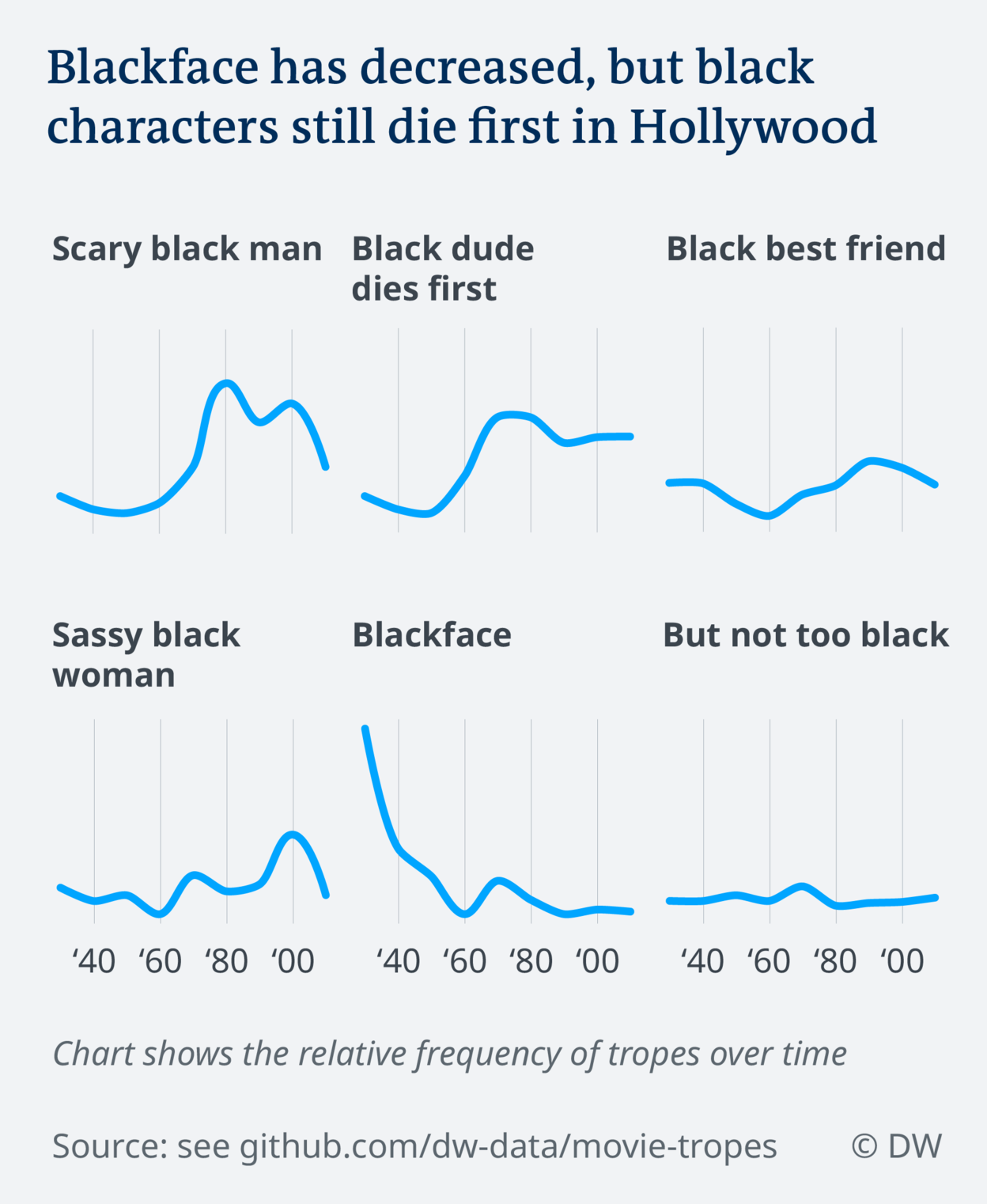 From What Hollywood movies do to perpetuate racial stereotypes by DW.

Misrepresentation is more than just annoying. It can lead to something called symbolic annihilation. This is the narrowing of what counts as valid, ‘annihilating’ people that sit outside it.

As an anonymous contributor to The Qarawiyyin Project put it:

Rather than humanizing the masses, [mis]representation creates an acceptance of a specific personality and hinges upon the individual possessing certain celebrated traits, only approved if deemed the “model” Japanese citizen, the educated Black man, or the beautiful hijabi makeup artist.

The self-fulfilling prophecy of funding

When it comes to film and television, decision-makers and funding bodies are conservative about where to put their money. But why do they see Black talent and stories as a financial risk? 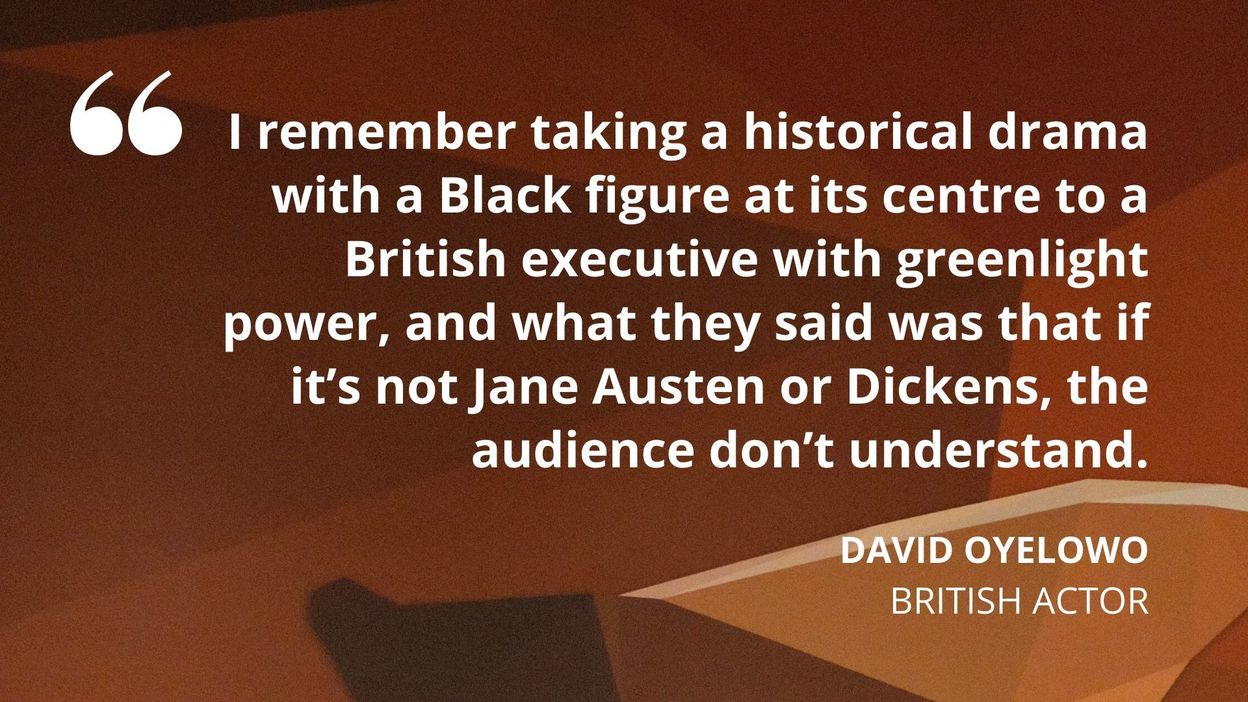 There’s a chance there’s a self-fulfilling prophecy at play.

The big projects (with white characters) get cast with big names and crew from the exclusive networks of the media world.

Big names get more funding because they are a pull for audiences and seem to promise quality.

This funding is pumped into marketing and distribution. More people watch these projects and the industry receives a false positive that centering whiteness is the safest, most lucrative bet.

The white talent in question will earn more experience and acclaim. So, of course, the likelihood they are selected for further projects increases.

And the cycle continues.

Poor representation in the media can have a slew of negative effects:

✅ Watch, pay for, review, share and recommend film and television that contribute to a diversity of stories being told and diverse talent being hired.

✅ Become a patron (e.g. through patreon.com) for Black creators that produce and share resources such as through social media, YouTube or podcasting. Since money talks, supporting creators and performers in this way sends a wake-up call to decision-makers in other areas of the media industry.

✅ When you see a trope, stereotype or two-dimensional character, talk about it, challenge it and unpick it.

Representation in media is a systemic issue that involves the development of talent on and off screen, limiting tropes and audience expectations. In particular, funding and project selection ends up developing white talent and telling stories through a white lens — giving inertia to a cycle that diversity standards and reports haven’t yet managed to break.

Racism in cultural representation and the media