Racial bias in hiring: How to make hiring more equitable for Black professionals

In 2017, a study found that discrimination in recruitment against Black professionals hadn’t improved in 25 years.

In an ideal world, hiring someone new would be a meritocratic process where the best person got the job. Sadly, we know this is not the case. Our bias seeps into the hiring process, regardless of how well-intentioned we are. It affects what we write in job descriptions and where we post them to how we interview candidates and decide who gets the job.

The only way to undo this hiring bias is to debias our process.

By not challenging our decision-making, we allow racial bias to create unmeritocratic conditions that work against Black professionals in the recruitment process.

While some candidates might take this bias as an indicator of uninclusive companies they’d rather not work for anyway, others opt to “whiten” their resume by removing indications of their race to sidestep resume bias. In 2017, another study found that Black applicants who “whitened” their resume were more than twice as likely to get a callback.

That’s just the start of the hiring process.

Inaction against these biases undermines the basic principle of fairness that businesses claim to operate on. So how do we make hiring more equitable for Black professionals? We’ve created a checklist:

It’s important to fill in the gaps before you introduce candidates to the equation. So many businesses take a worryingly relaxed approach to job descriptions and the interview process.

⚠️ Data shows that when we feel rushed, we’re most likely to revert to our assumptions and make what we see as the most risk-averse hire we can. So don’t rush.

✅ Test your bias. Harvard’s Implicit Association Test is a first step to evaluating our unconscious biases. It’s easy to be unaware of issues that don’t directly affect you. In Pew Research Center’s Race in America 2019 report, 74% of Black people say that Black people are treated less fairly than white people in hiring, pay and promotions while only 44% of white people agree.

We know that people who operate under the belief that they are fair and objective actually lean into biases more. This “paradox of meritocracy” happens because when we feel safe that we’re not acting in a certain way, we are less likely to keep ourselves in check.

By the same token, remember that taking an IAT and being aware of our bias should sharpen us against it. It shouldn’t persuade us into thinking that we’ve overcome it.

Testing our biases can lead to surprising and at times uncomfortable revelations. But once you know your bias, you can work harder to circumvent it and question any assumptions you make.

✅ Anonymize resumes. “Blind auditions” — where candidates can’t be identified by traits like gender or race — lead to more inclusive hiring. According to Gap Jumpers, just 20% of applicants who were not white, male, able-bodied people from elite schools made it to a first-round interview with traditional resume screening.

But using their form of “blind auditions”, 60% did. That’s the staggering impact of interrupting our biases.

✅ Emphasize culture contribution, not cultural fit. Forget questions like “would I hang out with them outside of work?”. It’s irrelevant to the role and plays into our affinity bias — namely, favoring those who are like us. Analyze what’s missing from your culture, and go out of your way to recruit people who can bring that to the table.

Hear Adam Grant, author of the highly-acclaimed bestseller Originals: How Non-Conformists Move the World talk about why hiring for cultural fit holds you back from being the most successful team you can be.

💡 Points that give us pause
🚩 Defensiveness is something that holds businesses back from eliminating biases. Be open about your biases, it’ll create a more open environment. (00:05 – 00:45)

🚩 By giving a chance to someone who is different in both thought and culture, you may find that you innovate more. Perhaps don’t solely hire individuals who think in the same way you do. Subvert cultural fit! (01:26 – 02:04)

🔮 Terminology Refresher
✨ Cultural fit = Individual attitudes, values and beliefs being in line with the core values and culture of an organisation.

✅ Predetermine the role’s criteria. When asked to pick the strongest or eliminate the weakest candidate based on predetermined criteria, study participants showed no bias. But when the choice was more ambiguous, participants recommended more white candidates.

Participants also fell prey to what is known as “redefining merit”. When Black and white candidates were strong in different areas, the area that the white person was stronger in was consequently considered more important. 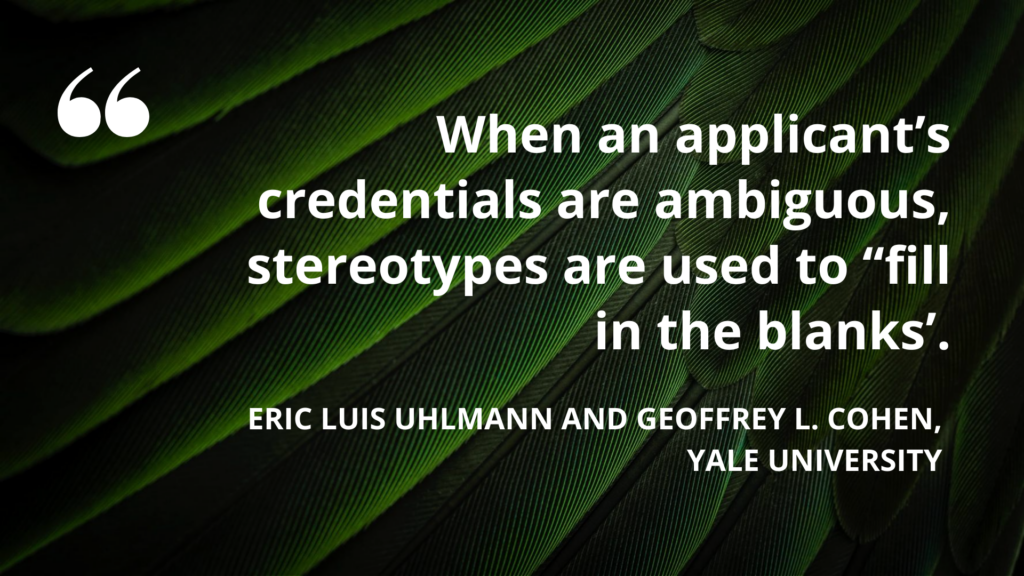 Define your must-haves and the “scoring system” that you’ll use. You could even assign a fixed value to each criterion to help you tally up scores in your final decision process. Concrete numbers can refocus your attention and keep the decision-making objective if you get distracted by candidates you have “a good feeling about”.

✅ Craft great competency questions. Create and stress-test questions that are designed to clearly determine whether candidates meet each criterion. Are all of the interview questions relevant to a specific role requirement? Is there any potential ambiguity on any of the criteria and how you would consider it to be met?

✅ Talk about diversity and equal opportunities. This can be especially impactful if your industry is known for its lack of diversity.

📈 When The Professional Golfers’ Association of America made it clear that they were looking for professionals of all backgrounds, the likelihood of people of color applying went up from 46% to 64%.

📈 Cambridge University asked for help with its lack of diversity after The Financial Times reported that some of its colleges took no Black students between 2012 and 2016. In 2018, rapper Stormzy pledged to pay the tuition fees of two students and helped Cambridge reach a new record when Black students made up more than 3% of new enrollees in 2019.

Write a statement but avoid recycling generic, formal ones that are commonly used. Be authentic (see Hubspot and Buzzfeed for inspiration) and if you really want to stand out, consider a video or personal message from senior leadership about why hiring diverse talent is important to them. (This avoids diversity hires not applying for fear of being considered a “token hire”.)

✅ Diversify your audience. Don’t limit your reach to only posting on the major websites. Post on diversity-focused sites like Jopwell. Get in touch with local universities and special interest groups. Encourage referrals from people of color in your organization. If you’re using a recruiter, demand diverse candidates.

What’s interesting is what happens when you have two minority candidates in the finalist pool.

The odds of hiring a minority were 193.72 times greater if there were at least two minority candidates in the finalist pool (controlling for the number of other minority and white finalists). This effect held no matter the size of the pool

✅ Stick to the script. It’s nice to get a feel of the person, but don’t get carried away because the candidate shares your love of traveling (there’s that affinity bias again). It’s problematic because in those 15 minutes you were talking about Thailand with Candidate A, you were asking tough questions of Candidates B & C. So, your ultimate assessment won’t be comparing apples to apples.

If possible, ask all candidates the same questions in the same order.

✅ Set a test or assignment. This allows you to directly compare performance and counteract interview bias. Ideally do this assessment as early as possible in the hiring process, given it’s the best indicator of actual on-the-job performance.

Slack moved away from the classic “whiteboard interview” where candidates solve a problem in real-time because “stereotype threat” causes people to perform worse when they’re aware of negative stereotypes attached to their group (e.g. Black students performing worse in a test when told that it measures intelligence because of the stereotype that Black people are less intelligent than white people).

✅ Compare candidates horizontally. Instead of going through each candidate one by one, start by looking at the strength of responses to the first question and compare how each candidate did on that specific question. Continue that way through your list of interview questions.

This avoids getting entrapped by the Halo Effect bias, where we tend to think a candidate has the right attributes for the job simply because we had a positive overall impression of them.

✅ Challenge assumptions. You need to be aware of your biases throughout the hiring process, especially when making a final decision or taking a candidate out of the running. Be critical of your own thinking and test for real evidence. Ask yourself:

Challenge others on the interview panel to question their thinking, too.

⚠️ Be particularly aware of your (and others’) assumptions of “the kind of people” who usually do this job. That’s loaded with bias favoring the status quo.

Rushed and flimsy hiring processes allow unconscious racial bias to work against Black professionals. Stamp out as much bias as possible by re-evaluating your process using our checklist and create more equitable conditions for candidates and future employees.

Inclusion Works from Hive Learning is a group-based peer learning program designed to create inclusive and impactful change across your organization. We give people the tools to make small changes to their daily behaviors and help them rapidly learn, relearn, and respond to the changing world around them.