Antiracism is actively doing your part to understand, identify and change problems that contribute to racial injustice.

These problems include attitudes, policies, behaviours as well as subtle patterns and messages that sustain societies and subcultures that are — plainly put — racist.

📌 A quick disclaimer
This forms part of our ‘How to be antiracist’ pathway in our Inclusion Works programme. For this pathway, we’ve made a conscious decision to focus on racism directed at Black people, given the current climate and Black Lives Matter movement.

We appreciate that racism is a major issue for other groups in America and around the world, and we’d love to do that justice in future content.

For now, we’d welcome your views and experiences on all forms of racism — please join the conversation here.

We also appreciate that people have different experiences of racism and are at different points in their journey learning about what they can do to combat it. This learning pathway is best suited to white people and non-Black people of colour that consider themselves at a beginner or intermediate level of their antiracism education.

How you can be ‘not a racist’ but live in a racist society
An overtly and actively racist person expresses views of hatred or disdain towards other races and does things that assert one (or some) race’s superiority over others.

We actually live in a society that has racism in it everywhere, advantaging white people and disadvantaging people of colour in micro and macro ways. But many of these things are considered socially acceptable and they aren’t challenged and condemned in the same way as overt racism.

Take a moment to skim the image below. It suggests that what we consider overtly racist is the tip of an iceberg. The rest of this ‘iceberg’ represents complex, varied things that covertly sustain racism.

When you learn about the history and present state of systemic racism in the United Kingdom and/or its Anglo former colonies (the United States, Canada, Australia and New Zealand), you can see that unfairness that was set up decades or centuries ago continues today.

Stopping racism requires active antiracism
The opposite of racist is antiracist. Antiracism underlines the need for racism to be actively countered with deliberate actions and attitudes.

And what about all of us that are neutral? Or perhaps passively antiracist? In other words, we dislike racism but don’t see any opportunity to change anything?

Unfortunately, that’s not good enough. The systems of racism practically run on their own at this point. And, short of being a castaway on a desert island, we’re all involved whether we like it or not.

The moving walkway analogy
Beverly Daniel Tatum is a psychologist, researcher and educator about racism. Her ‘moving walkway’ analogy is one of the most useful tools for explaining why someone can’t be a ‘passive antiracist’.

💡 Reflect upon the analogy yourself or use it in conversations about antiracism.

2️⃣ An active racist would see where the walkway is going, like the look of the outcome and start sprinting eagerly ahead. Yikes!

3️⃣ A neutral person might stand still. They don’t want to be seen as contributing to the direction but they are heading to the same destination.

4️⃣ A ‘passive antiracist’ would close their eyes or turn around so they can ignore the looming problem and feel they don’t have a part in it. But of course, this has no meaningful impact.

5️⃣ The only way to stop the walkway and the people on it going to its destination would be to run in another direction and get everyone else on board with stopping and redesigning the walkway.

Dr Ibram X. Kendi is an academic, author and the founder of the Boston University Center for Antiracist Research. He has researched, deepened and popularised the antiracism concept. (We’ll hear an inspiring clip about his own journey towards being antiracist later in this pathway.)

Kendi and Brené Brown, an academic and storyteller about the topic of shame and vulnerability, broke down why the racism-antiracism dichotomy can be so hard to accept in their conversation on Brown’s podcast:

👉 On one hand, racism has so much shame attached to it

👉 On the other, antiracism has so much hard work attached to it… and shame, too, because it involves confessing you’re part of a racist society.

Kendi says he meets a lot of people that claim they’re in a different category. He says that, for this to be valid, you need to define what that third category is with a consistent definition — and being a good or innocent person doesn’t stop your actions being racist or antiracist.

💡 Light-bulb moment: neither antiracist nor racist is a fixed identity. You can be a good person and be antiracist in some moments and racist (even if that’s ‘passive’ or ‘neutral’) in the next. The terms antiracist and racist are about what you are in terms of your actions or inaction, not who you are. 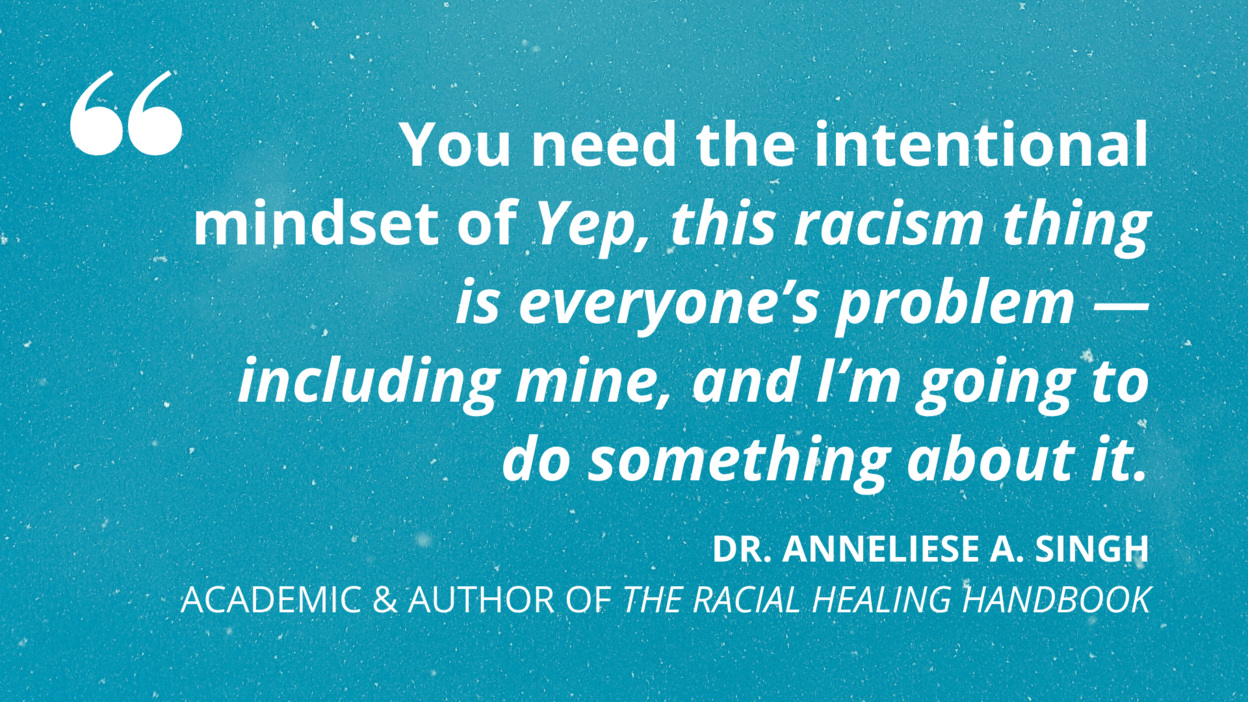 In most cases, he explains, people that reject the idea of antiracism and say they’re not racist are being defensive. But we don’t need to be defensive about accepting that we were tricked.

We were tricked into seeing racial disparities as normal, tricked into absorbing racist ideas and tricked into feeling the very defensiveness that tries to distance us from culpability.

Brown, approaching from a white perspective, points out that the shame that comes along with processing a racist world and facing our part in it is not the same type of shame as being publically shamed for being an overt racist.

You will not lose your goodness or the respect people have for you for deepening your worldview and getting real about the things you want to change.

🗝️ Your key takeaway
Antiracism is all about working out what you can do to change attitudes and systems that sustain racial injustice. Being neutral or passive is not enough to help. Antiracism must be active.

💬 Feeling uncomfortable or unsure about all of this?
No one is personally responsible for choices made in history. So it can be uncomfortable to accept this binary of racist-antiracist, especially if you hate overt racism and strive to be a good, impartial person.

The rhetoric (that means ‘the conversation and ideas’) around racism and antiracism is sometimes very uncomfortable and may not mesh with your worldview.

Discomfort and a long journey of reasoning, unpicking and discussing is a sign of progress. This is particularly true for white people that have not lived the realities of racism.

All we ask is that you keep an open mind and share your perspective as we go. So, how are you feeling about this topic right now?

How to self-educate & ideal starting resources

How to identify & discuss things you want to change