Politics can be extremely divisive. It drives a wedge between families — the kind of wedge that quickly scuppers productivity and employee happiness if it were present in the workplace.

What happens when a political hot topic is difficult to ignore? In February 2020, Gartner found that 47% of people said that the 2020 election had affected their ability to do their job.

Should things that take over the news, like an election or a movement, stay out of the workplace, or do we actually need to talk about it?

There are valid reasons to avoid political debate at work. It can create tension where there seemingly was none. These uncomfortable discussions can cause stress, isolation, a negative outlook and reduced productivity.

We also risk exclusion if our opinion isn’t part of the majority. During the 2016 US election, a fifth of employees reported avoiding colleagues because of their political views.

Stressed Out Help GIF by @studiosoriginals.

Mark Twain said, “Never discuss politics or religion in polite company.”. But maybe the problem isn’t politics but how we handle the conversations and emotions around it.

We know that an effective workplace isn’t one where people hold back on their thoughts if it happens to disagree with someone else’s. We can’t innovate or produce excellence if we don’t welcome all viewpoints, including opposing ones that can broaden our understanding.

In an experiment called America in One Room, a diverse mix of 524 American voters were brought together to discuss politics. They read a booklet of policies where there where words like “Republican”, “Democrat”, “liberal” and “conservative” were removed.

At the end, voters on the left and right shifted towards the center. Did everyone change their minds? Nope. But those who said they still held the same opinion would go on to say things like “but I’ve changed my understanding” or “but I understand better why [people feel differently].

Businesses aren’t faceless corporations, however big they get. They’re filled with people who are affected by things that happen outside of the workplace, including events that are political and personal.

If you live in a place where the rights of LGBT+ groups are being called into question, it will disproportionately affect colleagues who are LGBT+.

When a high-profile case of racism occurs against a member of the Black community, it will disproportionately affect your Black colleagues.

In a celebrated Medium article, writer Shenequa Golding captures the irrationality of professionalism above all else:

“I don’t know who decided that being professional was loosely defined as being divorced of total humanity… If I am to perform my duties for 40 hours a week, it’s asinine to assume that the life I live outside of those 40 hours won’t rear its head.

Whether I’m a sleep deprived single mother of two or a struggling college student who really needs this internship to graduate, the belief that only the part of me that fattens your bottom line is allowed in the workplace, is stifling.”

We need to understand that subjects like the Black Lives Matter movement aren’t political because they address systems and widespread problems, they’re human rights issues.

The only way for our colleagues to bring their full selves to work is to accept and allow subjects in the workplace that really matter to the people in them. It doesn’t have to be divisive or unproductive, if it’s done right. 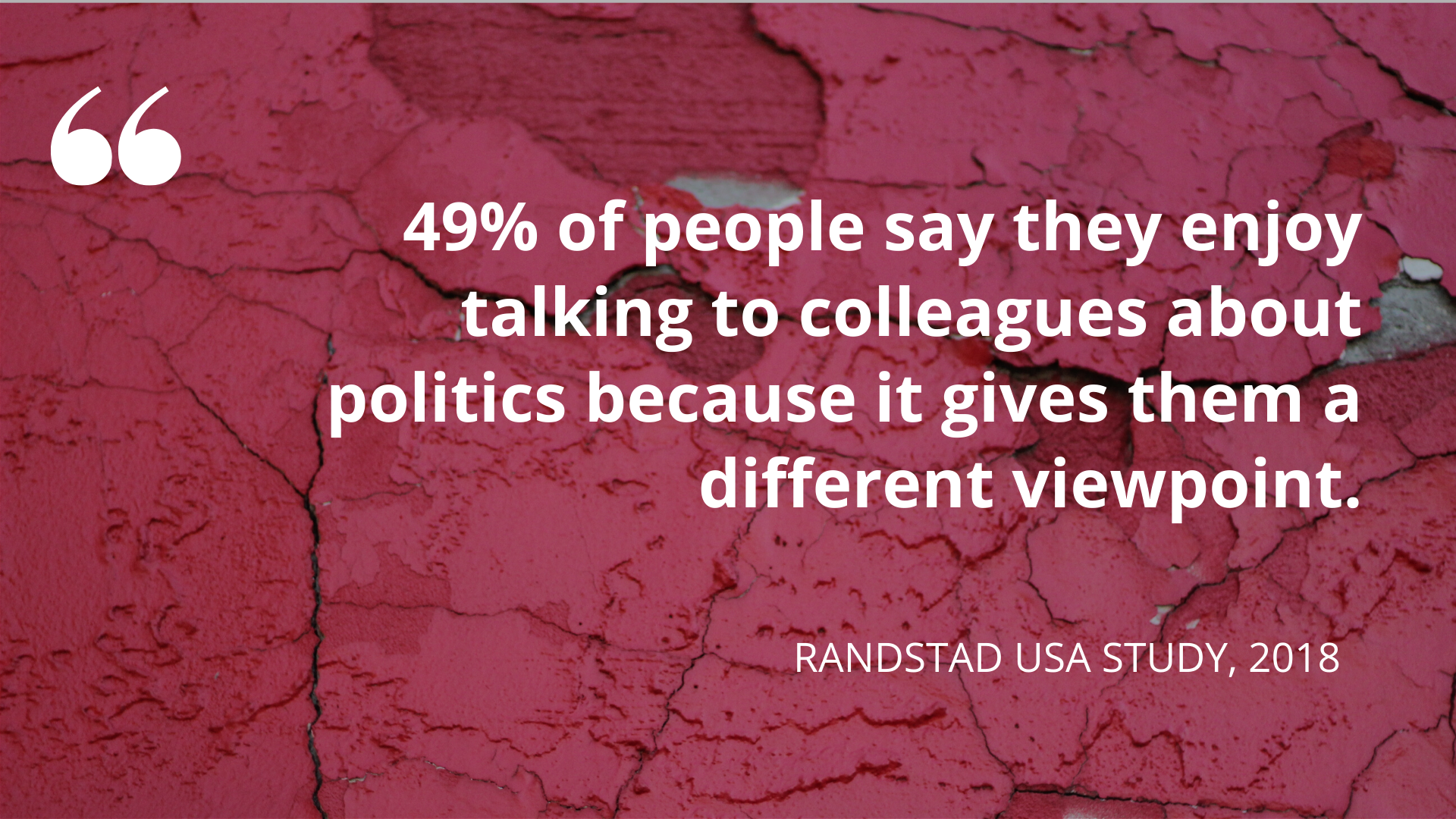 🗝️ Your key takeaway
There’s no denying that talking about politics at work is risky business. But diversity of thought is incredibly valuable and allowing discussion on topics that affect our colleagues is part of encouraging everyone to bring their full selves to work.

Trump’s executive order on DEI training is in place until January at least; here’s what it means